The Company executed a farm-in and joint venture agreement with KML No 2 Pty Ltd, a wholly-owned subsidiary of Artemis, on 14 October 2021 that gives it the exclusive right to farm in to the Osborne Nickel Project which consists of one exploration licence (Osborne Agreement). The Osborne Project is located 16 km southeast of Karratha in the West Pilbara Region of Western Australia, covering an area of approximately 45 km2 within the West Pilbara Mineral Field. Access is via a well maintained road heading southeast from the Karratha Industrial Estate, cutting through the eastern side of the project area then onto exploration tracks.

The Osborne Nickel Project area contains three major geological units; the Roebourne and Whundo Groups, which are separated by the regionally significant E-W trending Sholl Shear Zone, and the overlying Cleaverville Formation. The Project area sourced is illustrated in Figure 1.

The first reported regional exploration which covered the project tenement was undertaken by, Westfield Minerals NL and Whim Creek Consolidated NL (Whim Creek), who were actively exploring from 1964 to the late seventies. Several nickel-copper and base metal deposits and prospects were found but apart from some limited copper oxide open pit mining at Whundo in 1976, none of their prospects was developed into a mining operation.

From the early 1980s to 1992, Agip Australia Pty Ltd (Agip) took over from Whim Creek as the principal regional explorer. Their field activities included detailed mapping; soil geochemistry; aerial, ground and down hole geophysical surveys; and follow-up drilling. In 1988, an extensive aerial magnetic survey was flown at a line spacing of 100 metres which covered the project tenement. This contributed to the discovery of the Radio Hill nickel-copper deposit in 1984 and high grade silver deposit at Elizabeth Hill in 1987. No drill targets were identified within the project tenement at the time.

In 1993, Dragon Resources Ltd (Dragon) acquired some of Agip’s old ground, which included the area of the current project tenement. Dragon completed programs which included an airborne magnetic survey at 200 metres line spacing flown in 1994. Numerous targets were outlined for gold, nickel-copper, PGE and VMS mineralisation. Despite this, little detailed follow-up work was undertaken.

Most of Agip’s relinquished ground was subsequently picked up by Legend Mining Limited (Legend) in the early to mid-nineties. After 2005, Legend undertook a desktop aeromagnetic modelling study over the Cleaverville Formation BIF aimed at evaluating the magnetite potential of its entire Pilbara Project. The study was focussed on a 20 km strike length of BIF within the Cleaverville Formation where 11 km of which lies within the Osborne project area. 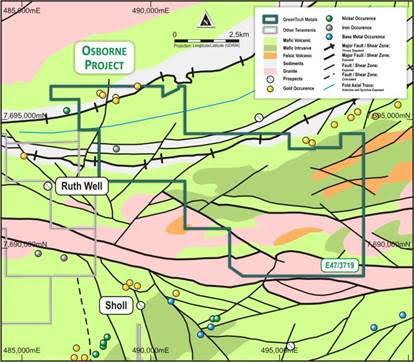 A detailed VTEM survey by Legend highlighted 3 conductor targets, being Panton, Hickmott and Osborne, which were followed up by MLEM surveys. The target designated Panton was dismissed as a superficial conductor. The remaining 2 targets are regarded as buried conductors representing possible sulphide mineralisation. The best target is Osborne, the top of which has been modelled at a depth of 100 metres.

The Hickmott prospect is located 4 km northeast of the Ruth Well nickel-copper deposit, and 7 km northwest of the Osborne anomaly. It is a discrete VTEM anomaly which coincides with the contact between ultramafic and basaltic lithologies. The stratigraphic position hosts historic copper workings along strike, although no workings are recorded in the immediate vicinity of the anomaly.

Three lines of EM at Hickmott identified a discrete bedrock conductor at a depth of 50 metres with a dip of 40-50 degrees to the south. A total of 11 soil samples (-2 mm fraction) were collected along two lines over the anomaly, however no anomalous results were returned.

Upon successful admission to the Official List, GreenTech will drill the 2 priority conductors identified in the FLTEM survey. Additionally, soil sampling will be undertaken aimed at identifying anomalous Ni/Cu responses that can be targeted by FLEM survey to identify weaker conductor responses for drill testing. 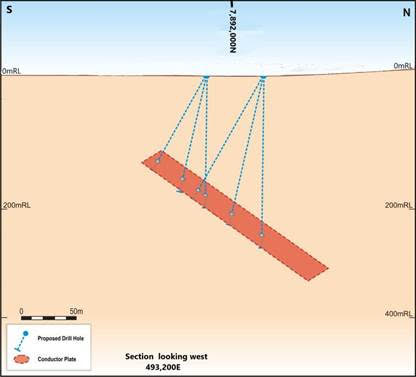