The Ruth Well nickel–copper deposits were discovered by Whim Creek Consolidated in 1971. Mineralisation comprises violaritised pentlandite, pyrrhotite, gersdorffite, niccolite, chalcopyrite, and magnetite within serpentinised extrusive peridotite of the Ruth Well Formation. This association suggests that the deposits are of a similar type to the extrusive Kambalda nickel deposits of the eastern Yilgarn Craton. The mineralisation however probably lies within a tectonic slice of the Andover Intrusion that has been faulted into the Ruth Well Formation of the Roebourne Group on the northern side of the major, approximately 300 km long Sholl Shear Zone. 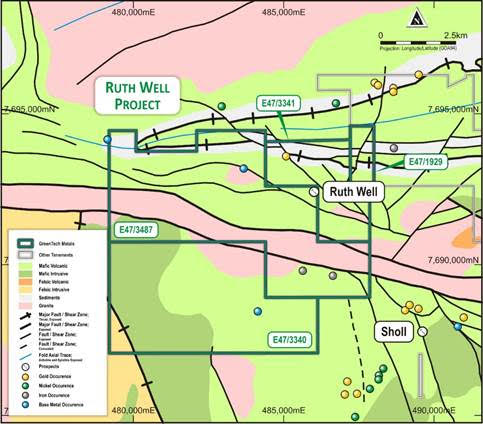 The most significant work to have been completed in the Ruth Well area was by Westfield NL between 1969 and 1975, Titan Resources NL (Titan) between 1989 and 2002 and Fox between 2004 and 2015. These companies carried out a series of open hole percussion, RAB, RC and diamond drilling programs.

Previous drilling in and around Ruth Well comprised 426 drill holes including open hole percussion, RAB, RC and diamond drilling for a total of approximately 18,827 metres. Artemis drilled another 37 RC drill holes and one diamond drill hole for an additional 2,923 metres in 2018. Figure 2 shows a cross section of the shallow nickel-copper mineralisation intersected in the Artemis drilling. 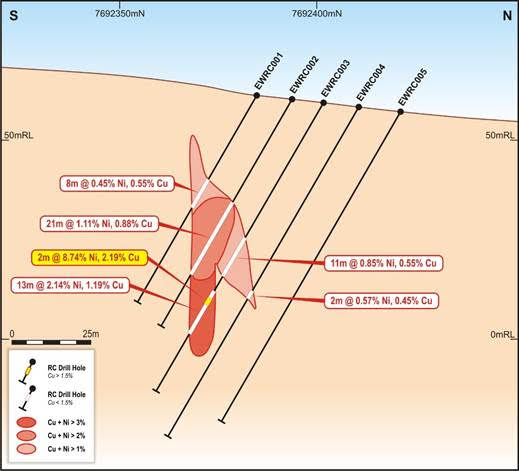 A review of a previous VTEM survey has highlighted 7 priority target areas for selective ground geophysical surveys, soil sampling and drill testing. Based on follow-up FLEM surveys three conductor plates have already been modelled associated with these targets. GreenTech will  also undertake surface geochemical sampling over the broader project area to assist with identifying anomalous areas for additional geophysical and drill follow up (Figure 3).

As a priority, GreenTech will systematically drill all the priority conductors identified in the FLTEM survey at the Ruth Well project and complete DHEM surveys on all holes to search for potential off-hole conductors. Based on drill success and the ongoing review of Artemis’ geophysical surveys, additional deeper searching FLTEM will be utilised over the larger project area where GSEM has previously identified numerous other targets and trends. 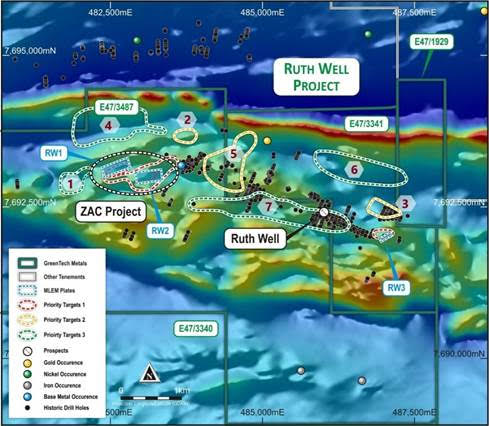