The Company entered the Whundo Agreement with Fox Radio Hill Pty Ltd, a wholly-owned subsidiary of Artemis Resources Limited (ASX: ARV) (Artemis) on 14 October 2021 that gives it the exclusive right to farm in to two mining licences and one miscellaneous licence that make up the Whundo Project (Whundo Agreement).

The Whundo Project is located approximately 40 km south-southwest of Karratha in the West Pilbara Region of Western Australia and is approximately 12.5 km southeast of the Radio Hill nickel plant (Figure 1).

The known copper and zinc deposits at Whundo are confined to a single stratigraphic horizon as a series of NW to NNW plunging shoots that outcropped as a sinuous line of discontinuous goethite- hematite gossans that can be traced for some 500 metres along strike. Individual ore shoots have a restricted strike length and are commonly 1-5 metres thick but reach a maximum thickness of 20 metres in the hinge zone of two small upright synclines in the axis of the major synclinal structure where they form the Whundo deposits.

The stratigraphic sequence at Whundo has undergone upper greenschist to lower amphibolite grade metamorphism, and is overprinted, in part, by hornblende hornfels contact metamorphism. These units have been folded about a moderately north plunging (25°-45°) synformal structure.

The West Whundo deposit outcropped as a gossan folded around a synclinal nose. The gossan was about 135 metres in length and up to 10 metres wide in the core of the syncline which plunges shallowly to the north. The gossan was surrounded by chloritic and sericitic schists, and with volcanic rocks present in the sequence. 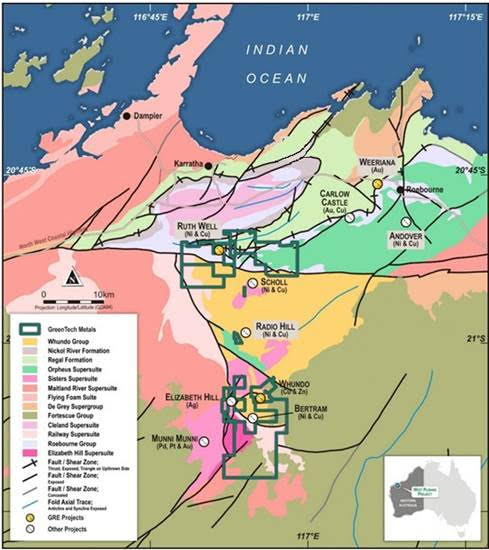 Mineralisation at Whundo was discovered in 1911. There was some early copper production prior to 1920, and in the 1950s cupreous (copper) ore was extracted for agricultural use. Between 1964 and 1966, Westfield Minerals (WA) NL undertook further exploration of the Whundo–Yannery area, and during 1970–71 additional drilling was carried out by joint venture partner Consolidated Goldfields NL. Following a feasibility study in 1975, open pit mining of Whundo by Whim Creek Consolidated NL in 1976 yielded 6,200 tonnes of supergene oxide ore at an average grade of 26.98% Cu. Noranda Australia Limited carried out further exploration (as joint venture partner) in 1982–83 to test for down dip extensions of ore at Whundo and undertook additional drilling in 1989.

Fox Resources NL (Fox) applied modern exploration techniques in the 1990’s and eventually mined part of the Oxide resource in 2005-2006. A total of 870 percussion and diamond holes for 52,586 metres were drilled at Whundo prior to Fox mining the deposit. Artemis drilled a further 56 RC drill holes for 3,528 metres following QAQC procedures meeting JORC Code (2012) requirements in-filling some of the previously drilled resources and to confirm the reliability and accuracy of the historic drilling by twinning historic holes. Drilling by Artemis confirmed that the historic drilling was sufficiently reliable for the delineation of a Mineral Resource estimate reported in accordance with the JORC Code.

All of the historical and new geophysical datasets will be used to generate a detailed geophysical bedrock interpretation and targeting map of the project area. A new Gradient Array Induced Polarisation (GAIP) survey area will be undertaken  between the Whundo deposit and  the original GAIP survey area, as highlighted by the yellow square in Figure 2.  This proposed GAIP survey area will cover the unsurveyed area between Whundo and Yannery and cover the highest-amplitude chargeability anomaly located in the SW corner  of the previous GAIP survey block.

A shallow RC drilling program will be undertaken to test the chargeable and resistive target trend identified between Yannery and Ayshia prospects, as highlighted by the dashed green outline in Figure 2. This anomaly trend will be tested by RC drill transects planned across the trend.  Untested VTEM target outlines to the NE and W of West Whundo will also be tested by RC drilling. 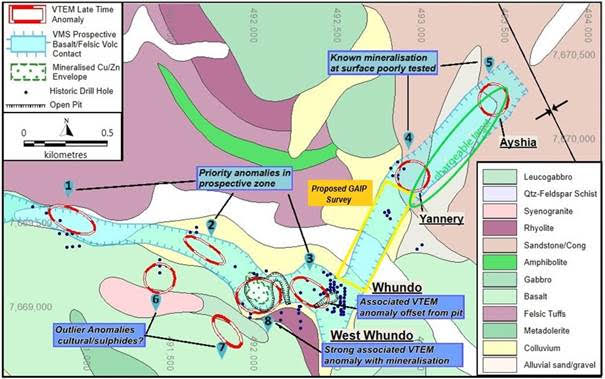